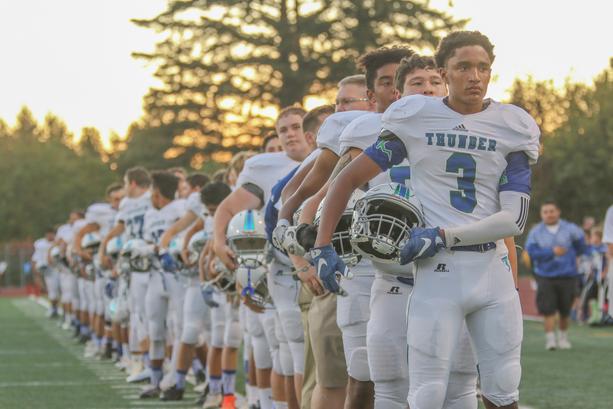 VANCOUVER, Wash. – Mountain View football will host the Skyview Storm in the Thunder’s final non-conference contest of the season Friday at McKenzie Stadium.

The Thunder enter the game with a 1-2 record after falling to Battle Ground last Friday. Skyview boasts an identical 1-2 record after consecutive losses to Eastside Catholic and O’Dea, two schools in the Seattle area. The Storm opened the season with a victory at Sunset.

Sophomore Darian Chase has led the Thunder offense in 2016, as he is averaging nearly 140 receiving yards per game to go with four touchdowns through three games. Chase also has two interceptions, one he returned for a touchdown.

Junior running back Junior Perry leads the Mountain View rushing attack with 178 yards on 26 carries, while sophomore Jack Mertens has contributed 165 yards on 21 carries. Senior quarterback Andre Scheer is the Thunder’s third-leading rusher with 143 yards on the ground. He has thrown for 492 yards and five touchdowns in 2016.

Mountain View holds a 6-5 record against Skyview in 11 all-time matchups, with the Thunder winning in 2015 for the first time since 2005. Mountain View won the first five matchups from 2001-2005 before dropping five straight until last year’s victory.

The Thunder will conclude their three-game home stand next Friday, Sept. 30, against Hudson’s Bay in Mountain View’s league opener. Kickoff for that game is also set for 4:30 p.m.