Thunder Fall to Storm In Shootout

VANCOUVER, Wash. – Mountain View Football concluded its non-league schedule with a loss to the Skyview Storm 56-31 on Friday, Sept. 23 at McKenzie Stadium.

The Thunder led the Storm 23-21 at halftime and 31-28 in the third quarter before the Storm rattled off 28 straight points to put the game out of reach.

Andre Scheel led the Thunder offense with 321 total yards and three touchdowns. He ran for 185 yards and two scores, while racking up 136 yards through the air with one touchdown to sophomore Darian Chase, his fifth receiving touchdown of the season. Chase finished with five receptions for 60 yards.

Mountain View got off to a great start offensively with touchdown runs of 51 yards from Scheel and 64 yards from junior running back Junior Perry.  Skyview scored on each of its first three drives before being shut out in the second quarter.

The Thunder scored on its last two possessions of the half, including a 36-yard field goal by Bryan Valdez, as the Thunder took the lead into the locker room.

Mountain View returns to action next Friday as the Thunder open 3A GSHL play against the Hudson’s Bay Eagles at McKenzie Stadium. Kickoff is set for 4:30 p.m. 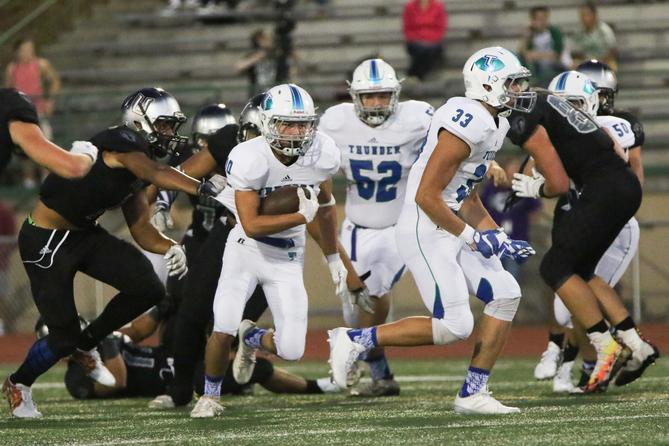