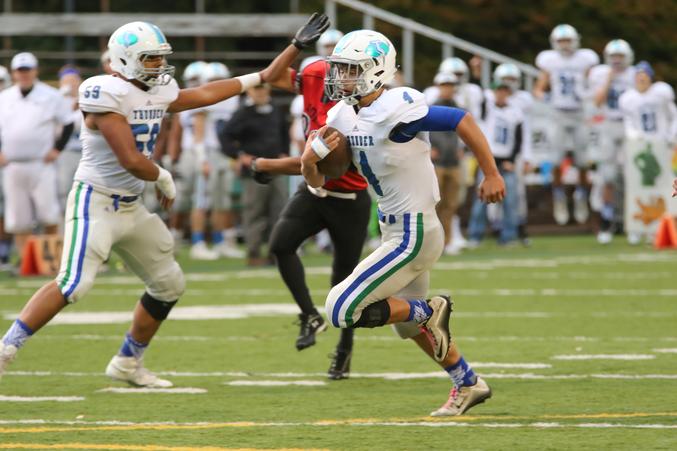 VANCOUVER, Wash. – Mountain View Football beat Prairie 42-14 on Friday, Oct. 21, improving to 4-0 in league play and clinching at least a share of the 3A GSHL title.

The Thunder sit alone atop the league standings, with second-place Kelso holding a 3-1 record in league. The Hilanders’ lone loss in league came against Mountain View. The Thunder are now 5-3 overall and are riding a four-game winning streak.

Senior quarterback Andre Scheer led the Thunder attack with 212 yards rushing and three touchdowns, along with perhaps his most efficient passing performance of the season. Scheer was 8-11 for 114 yards and a touchdown through the air.

Sophomore Darian Chase continued his tremendous season, recording a receiving touchdown to go with five receptions for 86 yards. Chase has scored at least one touchdown in every game this season.

The Mountain View defense recorded three interceptions – one each by Chase, Cameron Henderson and Andrew Gulliford.

The Thunder will conclude their regular season against rival Evergreen on Friday, Oct. 18 at McKenzie Stadium with a chance to clinch the outright league title. Kickoff is set for 7:30 p.m.