Mountain View’s Junior Perry took the opening kickoff 88 yards to give the Thunder a quick 7-0 advantage. Quarterback Andre Scheer connected with  Darian Chase for a 49-yard touchdown pass early in the second quarter to extend the lead to 14-0.

On the very next play from scrimmage, Mountain View’s Elijah Brennan sacked Kelso's quarterback and forced a fumble that was scooped up by Mitchell Delmage and returned for a touchdown to give the Thunder a 20-0 lead.

Neither team would add to the score until early in the fourth quarter, when Kelso made things interesting. The Hilanders opened the final quarter with a one-yard touchdown run to cap off a 75-yard drive. Kelso then got to within six points when the Hilanders connected on a 59-yard touchdown pass with 7:13 left in the game.

After a Mountain View fumble gave Kelso the ball with just under five minutes to play, the Thunder stifled the Hilander offense and forced a turnover on downs. Perry then iced the game with a rushing touchdown with 45 seconds remaining.

Perry finished with 61 yards rushing on 9 attempts. Scheer led the Thunder rushing attack with 78 yards on 15 attempts. He also threw for 107 yards and one touchdown, completing 8 of 16 passes.

Chase’s second-quarter touchdown reception gives him at least one touchdown in each game this season, pushing his season total to eight scores.

Mountain View will play on the road again next week on Friday, Oct. 14, at Kiggins Bowl against Fort Vancouver. The Trappers are 1-5 this season and 0-2 in league. Kickoff is set for 5 p.m. 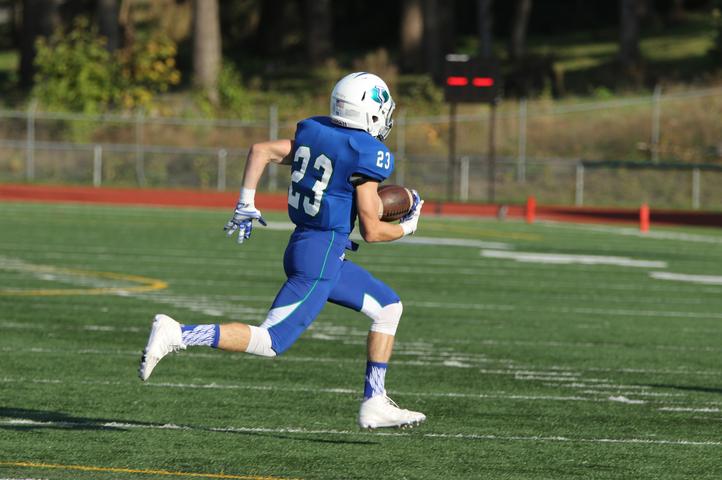