Thunder Set to Take On Trappers

VANCOUVER, Wash. – Coming off a big win over Kelso to remain unbeaten in league play, Mountain View Football will take on Fort Vancouver on Friday, Oct. 14 at Kiggins Bowl. Kickoff is set for 5 p.m.

The Thunder (3-3, 2-0 3A GSHL) are riding a two game winning streak, beating league foes Hudson’s Bay and the aforementioned Kelso in the last two weeks a after a tough non-league schedule.

Senior quarterback Andre Scheer leads the Thunder attack, with 539 rushing yards, tops on the team, and 806 yards through the air. Scheer has accounted for 14 touchdowns in 2016.

Junior running back Junior Perry has 522 yards on the ground and three touchdowns, while sophomore Jack Mertens has pitched in 239 yards and two scores this season.

Fort Vancouver (1-5, 0-2 3A GSHL) fell to Evergreen last weekend and Kelso the week before, with the Trappers’ lone victory coming in a 28-24 home win over Benson Tech in Week 4.

The Trappers are led by junior running back T.J. Willingham, who has 159 yards on 36 carries with one touchdown this season. Senior receiver Kyron Lowe-Ash has 19 receptions for 223 yards and a touchdown to lead the receiving corps.

Mountain View and Fort Vancouver have met a total of 31 times, with the Thunder holding a 20-11 all-time advantage. Mountain View has won 10 straight dating back to 1999. The two teams last met in 2013, a 63-14 Thunder victory.

The Thunder will conclude their regular season with league games against Prairie on Oct. 21 and rival Evergreen on Oct. 28. Both games will be played at McKenzie Stadium. 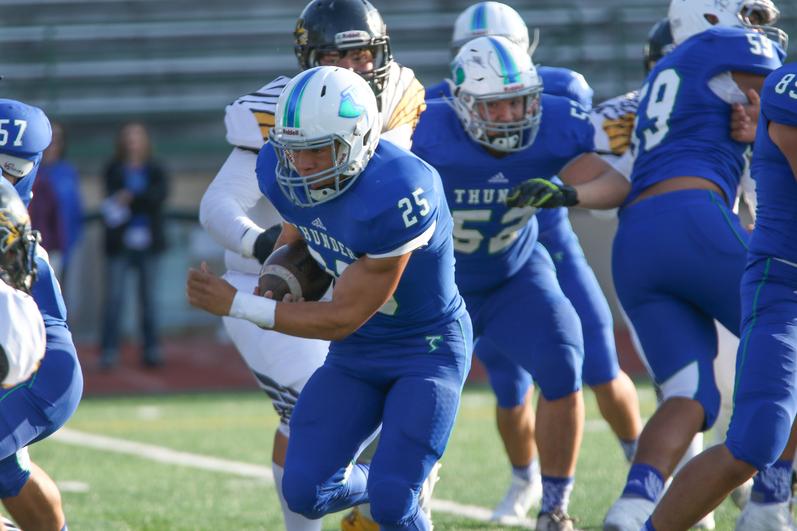